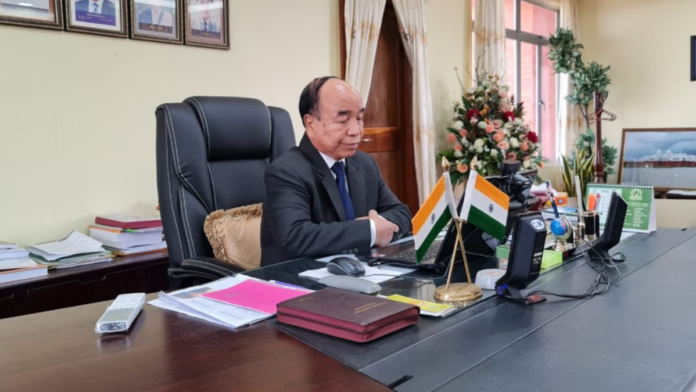 Mizoram Chief Minister Zoramthanga has urged the UN to take proactive steps to curb the illegal drugs trafficking and smuggling of various contraband goods from Myanmar.

The Chief Minister said that without any control and prohibition of the Myanmar authorities, rampant drugs trading and poppy cultivation has been going on in the neighbouring country and they are smuggled to Mizoram, Manipur and other northeastern states.

Apart from the Golden Triangle (which includes Myanmar, Laos and Thailand), militant outfits in Myanmar are involved in poppy cultivation, he said.

“We are facing the big challenge of drug trafficking. Mizoram police, para-military forces together with Churches, NGOs and local people have joined in the war against drugs,” Zoramthanga said during an interview with IANS.

“We need the help of the Indian government and the UN to effectively tackle the illicit drug trades.”

The 78-year-old veteran politician said: “Considering the humanitarian aspects, we are providing relief and shelter to over 30,000 Myanmarese and over 300 tribals from Chittagong Hill Tracts of Bangladesh.

Over 30,500 Myanmar nationals sheltered in the northeastern state after the military seized power in the country through a coup in February last year while around 310 Kuki-Chin tribals, following troubles, fled from the Chittagong Hill Tracts of southeast Bangladesh and took shelter in Mizoram since November 20.

Zoramthanga, who had written several letters and spoke to Prime Minister Narendra Modi and Home Minister Amit Shah urging them to provide relief, aid and asylum to the Myanmar nationals as the state government was facing a financial crisis to deal with the Covid-19 pandemic and related problems, said that despite being a small state, Mizoram is providing relief and shelter to the Myanmar and Bangladeshi nationals without any assistance from the Central government.

“The Central government has been saying that as India is not a signatory of the UN Refugee Convention, that’s why they are unable to provide direct help in this regard. But taking care of the large number of refugees is a big burden from the state,” he said.

After the Myanmarese had started entering Mizoram (few in Manipur) since March last year, the Union Home Ministry had sent out an advisory to four northeastern states — Mizoram, Manipur, Nagaland and Arunachal Pradesh — which share a 1,640-km unfenced border with Myanmar, saying that the states and UTs have no power to grant “refugee” status to any foreigner, and India is not a signatory to the UN Refugee Convention of 1951 and its 1967 Protocol.

The Mizoram government and other organisations including Churches and NGOs have not only been giving food, shelter and other assistance to the Myanmar refugees, but the state government has providing teaching to their hundreds of children, the Chief Minister said.

“My own maternal uncles have died in Myanmar in the conflict. We know their language and food habits. They are our brothers and sisters. We cannot overlook the hapless condition of the distressed people. I hope that after the restoration of peace in Myanmar, the refugees will return to their country,” he said.

Due to the conflict between the underground outfits and the Bangladesh police and armed forces, the refugees from that country took shelter in Mizoram, he said, adding that the opposition parties are fully cooperating with the state government in handling the refugee issues.

The Myanmar refugees and the Chin-Kuki tribals of Bangladesh and the Mizos in Mizoram belong to the Zo community and share the same culture and ancestry.

The Chief Minister said that after dealing with Covid-19 pandemic in which thousands of people were infected and hundreds of them died, the Mizoram government is now facing the big challenge of the refugee issue.

The 40-member Mizoram Assembly is expected to go to polls in November or December 2023.

Zoramthanga, also the President of the ruling Mizo National Front (MNF), to a question about the political situation in his state said that the assembly elections are around one year away, and the situation may change in the next several months.