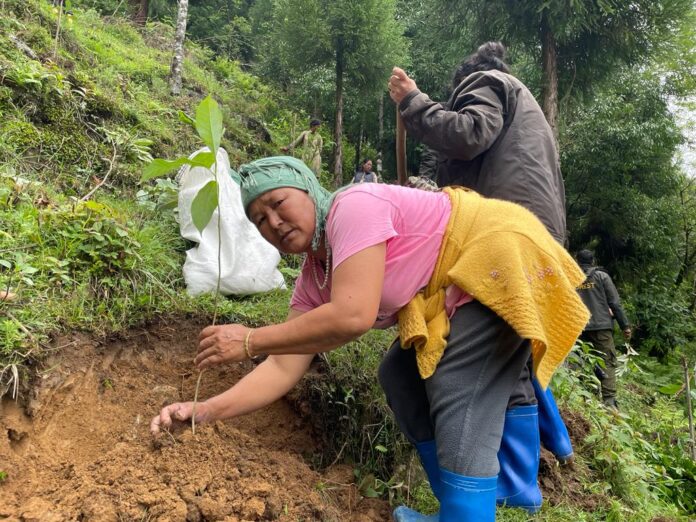 Bikrant Tiwary, CEO of social organisation, Grow-Trees.com believes afforestation can not only revive the state’s flora and fauna but also it’s economy

The tiny North-Eastern state of Sikkim covers just 0.2% of India’s geographical area but contains 26% of the country’s biodiversity. Not surprisingly, it is one of the 18 biodiversity hotspots in the world with a large number of species of trees, orchids, flowering plants, medicinal plants, birds, moths, and butterflies. More than 40 per cent of the state is under forest cover.

However, deforestation, construction activities and environmental threats like global warming and extreme weather events have led to diminishing wildlife habitats and per cent paved the way for human-animal conflicts. Himalayan Black Bears have been known to stray into farmlands while the disrupted ecological balance has led to a reduction in fruiting species and posed a clear threat to the state’s biodiversity.

This is why, apart from government programmes like ‘Smriti Van’, ‘Sikkim Green Mission’ and ‘Ten Minutes to Earth’, social organisations such as Grow-Trees.com have come forward with various planting initiatives to repair the ecology of the state.

Bikrant Tiwary, CEO of Grow-Trees.com says, “Through our various tree planting projects for Himalayan forests, monasteries, schools and for the state’s overall ecosystem, we are aiming to enhance Sikkim’s bio-diversity and aid its eco-tourism. We believe that Sikkim’s eco-tourism can be enhanced only through nourishing its biodiversity, ecology and wildlife. Planting more trees will also create carbon sinks, provide employment opportunities to local people, prevent animal-human conflicts and curtail crop destruction, which will safeguard the local economy.”

An ecologically fragile part of Sikkim is Pakyong which shares its borders with Tibet and Bhutan Grow-Trees.com has planted around 15,000 trees here via its ‘Trees for Himalayan Forests’ project. Many local species have been planted here including Englehardtia Spicata (Mahuwa), Acer Campbelli (Kapasi), Duabanga Sonneratoides (Lampatey), Macaranga Nepalensis (Malata), T.Myriocarpa, Terminalia Alata, Symingtonia Populnea, and Bischofnia Javanica. These trees will also help in preventing flooding by regulating the downstream water flow.

Bikrant points out that regions where tourist traffic increases, often suffer the most ecologically and give the example of the Eastern District of Tsomgo where the speedy development of infrastructure has led to vehicular pollution and contaminated lake water. To address this issue, through its ‘Trees for Himalayan Monasteries and Forests’, project, Grow-Trees.com has planted trees at the fringes of Kyongnosla Alpine Sanctuary and the surroundings of Hattipailey Reserve Forest land and Boudha Gurung Gumpa land. These trees will improve the ecological health of the forest and also increase the fruiting and flowering species. Indigenous tree species will also increase water tables for rural communities that are dependent on natural water resources.

The ‘Trees for Himalayan Monasteries and Schools’, the project is beautifying monastic and educational institutions as well as forests near Aritar, Sudunglakha and Dalapchand Gram Panchayats while ‘Trees for Ecotourism’ is being implemented in the watershed catchment area in East Sikkim, 12300 ft and 13000 ft above sea level.

“A 2017 report by the Sikkim Forest, Environment, and Wildlife Management department states that there will be an increase in temperature of 1.8°C in the East of Sikkim to more than 2°C in North and South Sikkim between 2021 and 2050. Projects like these are hence critically important to mitigate the impact of global warming and climate change,” concludes Bikrant.