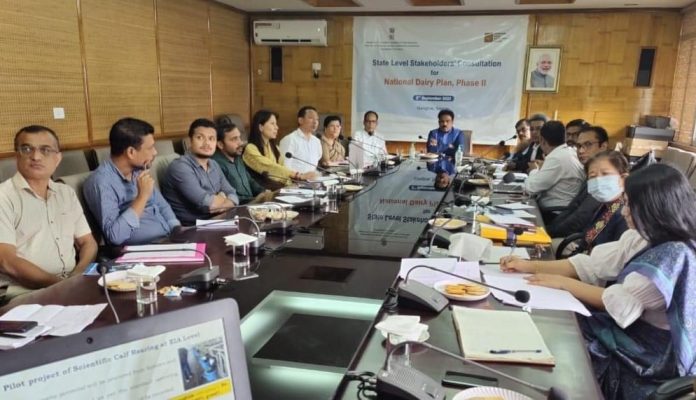 At the outset, the NDDB presented the back ground of National Dairy Plan and expressed that the Sikkim is being considered for support NDP II looking at the performance of Sikkim Co-operative Milk Producer’s Union Ltd. Mr. Kahnu C Behera, Manager, Planning made power point presentation on the components of the dairy project possible under the NDP for Sikkim.

The meeting discussed in details on various aspects of milk procurement, processing and marketing and the available opportunity to improve upon the existing levels and systems. Earlier the NDDB had a field visit to West Sikkim and had first hand information on the procurement scenario in the state, which was discussed at length in the meeting to incorporate the gaps in the proposal. Dr. P. Senthil Kumar in his presentation and address expressed that Sikkim has an opportunity to develop organic milk production hub, which may be done in a selected clusters in the west Sikkim and aim for production of premium products, long shelf life products in order to extend the market within and outside the state and the country. Consultation meeting suggested that on venture in to Organic Milk Production in the state, the focus has to be in one selected cluster preferably in West Sikkim and all components be integrated and the whole value chain be integrated in a manner that all input requirements are met in the cluster and sustainable input supplies such as feed, fodder be ensure for sustainable organic milk production in the selected cluster. Government of India officials and world bank officials expressed that the Sikkim is a performing state in Dairy Sector and thus it is selected among the North Eastern State for consideration under the NDP II and has all potential to make the NDP II a reality. They have noted down all the requirements of the state of Sikkim and indicated that most of the requirements may be met in the project.

The team observed that as a whole in Sikkim has lot of scope and opportunity to improve on the procurement chain including providing building and equipment infrastructure including cooling facilities, feed, fodder and other inputs support.  The plan for expanding milk production and procurement be worked out in manner to sustain the current growth rate and there is a need to expand procurement chain, processing and marketing in the state. The NDDB team informed that NDDB, being the apex technical Organization in the country on Milk, possess all required expertise and assured that the team will extend all support to achieve organic milk production and also support other areas of milk procurement, processing marketing to The Sikkim Co-Operative Milk Producer’s Union Ltd. The meeting was ended with vote of thanks by Addl Director AHVS