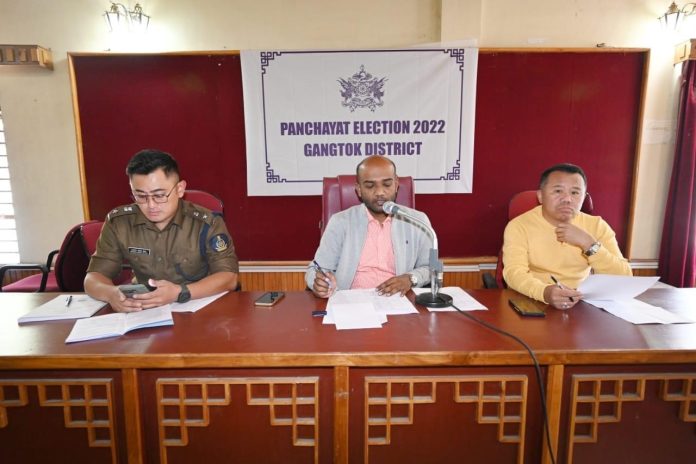 The meeting also  had the presence of Assistant Returning Officers and the officials of DAC.

Shri Ragul K adequately briefed about the roles and responsibilities of the Sector Magistrate and Sector police officers to ensure a free and fair Panchayat Election 2022.

He informed that there are 130 polling stations with 58,238 voters. All 15 wards of Zilla will have polls. He added that out of 130 Gram Panchayat wards, 32 are uncontested, and 98 wards will be going to polls.

The Returning Officer further added that the contesting candidates can campaign till 8th November until 5 pm.

The meeting deliberated on various aspects of the elections, such as vehicles arrangement, collection of poll materials, the second round of training and instructions regarding the poll day, commissioning of EVMs, arrangement in the control room, training of sector magistrates, deployment of polling personnel, and other necessary arrangements.

Share
Facebook
Twitter
Pinterest
WhatsApp
Previous article
In the panchayat elections, vote for your village or don’t vote at all.
Next article
NAMCHEYBONG MLA PROVIDES SUPPORT AFTER A FIRE BROKE OUT AT ASSAM LINGZEY.