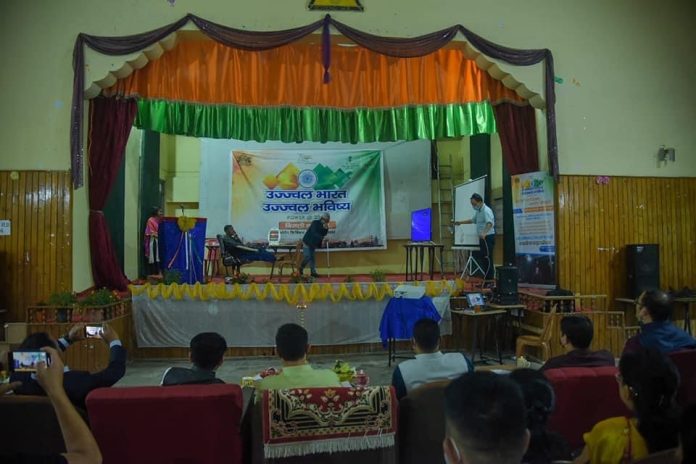 Soreng, July 28 (IPR): An event to feature the achievements and visions of India for 2047 in Power and Renewable Energy, the State Designated Agency, Department of Power celebrated the “Ujjwal Bharat, Ujjwal Bhavishya – Power @ 2047” under the aegis of Ministry of Power, New and Renewable Energy, as a part of the Azadi Ka Amrit Mahotsav campaign at Soreng Senior Secondary School Auditorium, today.

The Chief Guest, Shri Aditya Golay firstly expressed his gratitude towards the department for organizing such an informative program in the district. Narrating the challenges faced by the Government in providing sufficient power to every household, he strongly discouraged the misuse of electrical power and energy which are commonly practiced. He reiterated the disadvantages of energy waste and it’s repercussion in our day to day lives.
He advised the students to be proactive in propagating good social causes such as saving electricity, being cautious against fraudulence, knowledge about the consumer rights and so forth. Further, he also motivated the students to take pride in being a citizen of such a glorious nation and to enjoy the democratic ideals of Independent India by virtue of being born in Sikkim post the historic merger. Lastly, he encouraged them to take part in the AKAM activities that are being organized throughout the district.

Shri Pemba Lepcha in his address informed that the event is being celebrated throughout the Nation with a vision of India for 2047 in Power and Renewable Energy while the country marks 100 years of Independence. Terming the celebratory event as Bijli Mahostav, he highlighted the key achievements of the power sector and the unprecedented growth it has shown over the past few years. He also enumerated all the schemes and initiatives that have been implemented, also mentioning the forthcoming schemes for a growing nation. He applauded the Government’s vision to provide clean and uninterrupted energy for all especially for the far flung regions in the country.
Shri Lepcha also informed about the department scheme for C and D category employees which enables them to avail a loan up to Rupees One Lakh to buy any energy efficient 5 Star graded appliance, with SISCO bank as the disbursing agency.

Further, in order to highlight and inform about the Central Government’s initiative and achievements of the Power Sector, the department showcased videos on Universal Household Electrification Programme, One Nation One Grid, Consumer Rights, Renewable Energy and Capacity Addition.