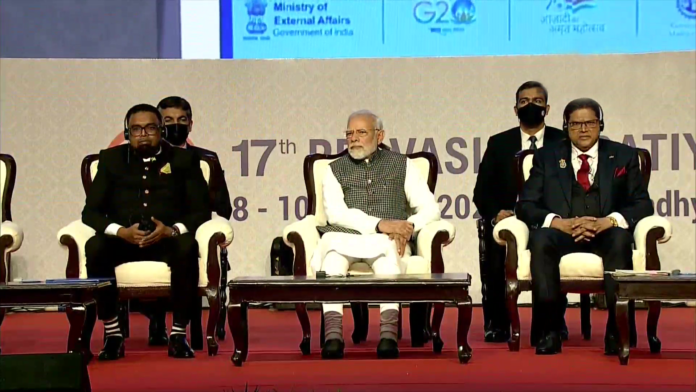 “G-20 is not just a diplomatic event, but it should be turned into a historic event of public participation where one can witness the spirit of ‘AtithiDevoBhava’”: PM Modi at PravasiBharatiyaDiwas in Indore

Gangtok, January 2023, Various G20 events across the country captured the interest and imagination of the citizens as the first Finance Track meeting of 2023 got underway in Kolkata on the 9th of January. Prime Minister Narendra Modi and External Affairs Minister Dr. S. Jaishankar celebrated the 17th PravasiBharatiyaDiwas with members of the India diaspora in Indore while the University of Thiruvananthapuram in Kerala organized a special G20 themed University Connect event.

The City of Joy, Kolkata, held the 1st Meeting for the Global Partnership for Financial Inclusion (GPFI) under the Finance Track of India’s G20 Presidency from 9th-11th January 2023.  Day 1 of the meeting consisted of a symposium on Unlocking the Potential of Digital Public Infrastructure for Advancing Financial Inclusion and Productivity Gains, where Queen Maxima of the Netherlands delivered the keynote address. Panel discussions were held on the topics of Leaving No One Behind: The Role of Digital Public Infrastructure in Financial Inclusion & Productivity Gains and Digital Financial Ecosystem based on Digital Public Infrastructure (DPI): A Policy Perspective. Besides, an exhibition on “Digital innovations for Financial Inclusion” showcased India’s achievements and efforts in advancing digital financial inclusion, financial system infrastructure, emerging technologies, and achievements in various stakeholders such as Public Sector Units, Public Sector Banks, Fintech companies, etc. A cultural outing followed the meetings in the evening on a river cruise where the G20 delegates experienced the scintillating heritage of Bengal.

Meanwhile, the Day 2 of the 17th PravasiBharatiya Divas Convention 2023, held at the street food capital of India, Indore, witnessed a sensational keynote address from India’s Prime Minister, Shri Narendra Modi, who also inaugurated the first-ever digital PravasiBharatiya Divas exhibition on the theme ‘Azadi Ka Amrit Mahotsav’- Contribution of Diaspora in Indian Freedom Struggle. Speaking about India’s G20 Presidency in Indore, Prime Minister Modi highlighted that “G20 is not just a diplomatic event, but it should be turned into a historic event of public participation where one can witness the spirit of ‘AtithiDevoBhava’”. He also went on to describe that “the skill, values and work ethics of Indian youth can become the engine of global growth.”

The session also witnessed welcome remarks from India’s External Affairs Minister, Dr. S. Jaishankar, along with an address from Shri Shivraj Singh Chouhan, the Chief Minister of Madhya Pradesh. Besides, the meeting witnessed special addresses from dignitaries such as Mr. ChandrikapersadSantokhi, the president of the Republic of Suriname, and Dr. Mohamed Irfaan Ali, the president of the Cooperative Republic of Guyana. India’s G20 Sherpa Shri Amitabh Kant and G20 Chief Coordinator Shri HarshvardhanShringla also addressed India’s diaspora during a town hall session and gave an overview of India’s G20 Presidency. Besides, the release of the commemorative postal stamp ‘SurakshitJaayen, PrashikshitJaayen’ and two plenary sessions on the topics of the Role of Indian Diaspora in promoting Indian Healthcare Eco-system in Amrit Kaal: Vision @2047 and Leveraging the soft power of India – Goodwill through craft, cuisine & creativity were also conducted.

Besides, God’s own country, Kerala, also adorned the colours of India’s G20 Presidency as it welcomed the University Connect programme on the theme “One Earth, One Family, One Future” at the University of Kerala in Thiruvananthapuram. The interesting lecture series to engage the youth minds of the country was hosted by the Research and Information System for Developing Countries (RIS) in line with the upcoming 1st Health Working Group Meeting under the Sherpa Track of the Indian G20 Presidency which would be held at Thiruvananthapuram on 18th-20th January. The lecture series witnessed addresses from key speakers, such as former ambassador T.P Sreenivasan on the topic of the ‘Indian Presidency of G20’ followed by remarks from prominent speakers.

Lastly, G20 was the theme of the International Kite Festival held at Gandhinagar, Gujarat, from the 8th to the 14th of January, 2023. The G20 nations took part in the festival, attempting to achieve a Guinness World Record for the maximum number of kite enthusiasts from various countries flying kites simultaneously. The kites with the G20 logo soared in the skies of Gujarat. An immense gathering of people taking selfies was also seen near the special G20 photo booth that had the G20 logo along with the theme of “One Earth, One Family, One Future.”