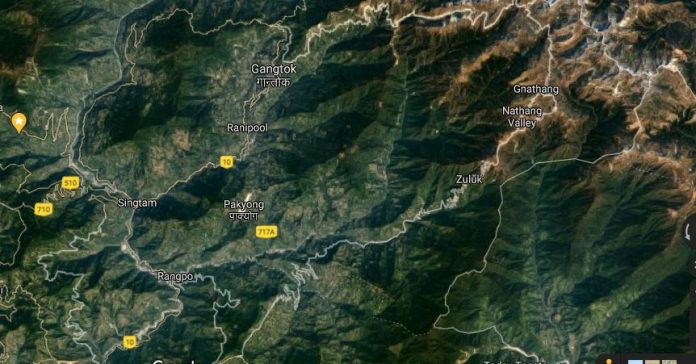 Getting Pakyong declared as a District in east Sikkim was a long pending demand of the residents of the town. Also it was Chief Minister PS Golay’s 2019 election manifesto promise.

Now, fulfilling this election manifesto promise of the SKM, CM PS Golay has declared that Sikkim will have two new districts in the coming days. One in the West, namely Soreng, and one in the East, namely Pakyong, as the 5th and 6th District of the state. This was announced on the occasion of International Yoga Day.

Namcheybong MLA Em Psd Sharma while addressing the media yesterday said that Pakyong has been declared a new district in Sikkim and thanked the PS Golay led Government for the same.

Let’s have a tour of what’s inside the new District Pakyong: –
It will cover three sub-divisions: Pakyong, Rongli, and Rongpo which will cover an area of 404 Sq.Km with a population of 74,583 According to the 2011 census.

This new district will get Sikkim’s only Airport as well as Railway Sation. The border checkpoint in Rangpo, Rishi and Lingsey will fall under it. Rangpo Checkpost is a gateway of Sikkim connecting with west Bengal.

There will be 11 Revenue circles and 51 revenue blocks and 2 ADC circles in Pakyong and Gangtok.

In the terms of secondary healthcare, Singtam District hospital will be a major one and there is one CHC in Rehnock and Pakyong. Rangpo Machong and Rongli has Primary Health Center PHC.

In the terms of Education, this new district has grabbed one of Sikkim’s top colleges Sikkim Manipal Institute of Technology, and the other is Himalaya Pharmacy Institue and one new Govt Degree College in Rehnock. Apart from this it shall be home to SICUN and National School of Drama.

Recalling the rich and glorious history of Pakyong which is the main connection of far rural in East Sikkim, Chief Minister PS Golay said its conversion into a District, which was a long-standing demand of the local people, would ease the hardships of such people and enable them to resolve their administrative problems more seamlessly.

In a recent meeting, The Chief Minister of Sikkim PS Golay has directed the Offical to find a suitable building to start the functioning of the District Administration office in Pakyong soon once the district is formed. The District Collector for the newly carved out district would be appointed soon once it’s formed, he said to The Sikkim Today.