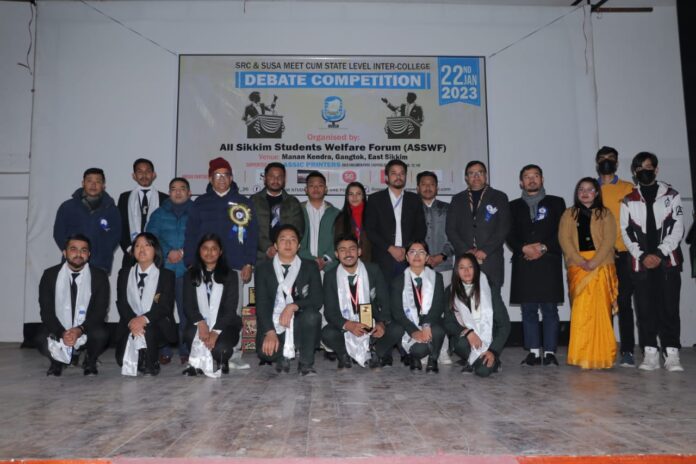 The SRC and SUSA Meet cum State Level inter college debate competition was organised today at Manan Kendra Gangtok. The event was graced by Shri. CP Dhakal State Information Commissioner as chief guest. The event was graced by Prabhakar Goley, Chief Paytron of Garib Jan Kalyan Prakosta as guest of honour. The debate was held on the topic Sale of Human Organs should be legalised wherein the students of Sikkim Government Law College Gangtok and Sikkim Government College Namchi took part and the winner of the debate was Sikkim Government College Nmachi. The title of best speaker was conferred to Biswajid Sapkota of Sikkim Government College Namchi. The chairperson of the debate was Dr. Dilip Pandey Associate Professor in Law and the Dean of Students Affairs Sikkim Government Law College, Gangtok. Debate was judged by Dr. Neeraj Adhikari and Dr. Bharat Kumar Pradhan. The event was addressed by Bishal Sharma General Secretary Sarathi Sangathan, Dr. Neeraj Adhikari President Doctorates Association of Sikkim and Former President of SUSA, Naresh Chettri Motivational Speaker, Pradeep Tamang Former SRC President and Advocate, Yogesh Sharma, President SUSA, President of All Sikkim Students Welfare Forum in his address stressed the lack of debating culture amongst the students and requested the SRCs of colleges to form different clubs and societies in colleges. Chief Guest in his address highlighted the importance of debating culture in the society and also congratulated the organising committee for organising such programme. The programme was followed by interactive session with the SUSA executives, ASSWF executives and SRC members.