Before 2024, neta will check your facebook reaction before your vote 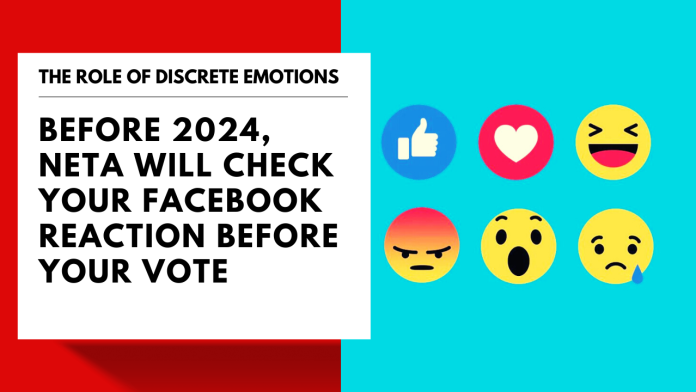 Social media like Facebook reaction is the new recognizing tool for today’s politicians and political parties in Sikkim & Hilly regions.

Unlike conventional advertising, such communication is neither loud nor shrill. It is, as experts say, a clever way of influencing just the right set of people — primarily young people who don’t mind venting their emotions on social media and are keen to make a difference.

Here we evaluate how positive versus negative political content relates to emotional responses, and how this consequentially influences the degree to which articles are shared across social media in the context of an election.

Let us ask how we can better understand Facebook Reactions as expressions of online sentiment during moments of political mobilization: elections and campaigns. We focus on Reactions to political news during the 2022 Darjeeling municipality election. Despite emotional engagement with news during elections having implications for the political process, little work has sought to explore the links between political news and this new form of online emotional engagement.

The 2022 Darjeeling elections were the biggest celebrated in the democratic history of the municipality where new candidate Ajay Edward’s party thumped the majority. Ajay was new to Politics and his majority of voters were Silent voters & New Generation who didn’t go out for the campaign but they are sure watching Ajay’s speech on Facebook and reacting to masses of Love and Wow reaction which gave a positive impact on other voters.

This social media tool has become a potent tool for Sikkim’s politicians to know which party they are supporting.

In Sikkim, politicians don’t make a Facebook page, Instagram, and Twitter so seriously, only a few of them use Twitter which is too handled by their PR Team. Facebook profiles are more things they are into, this is where they need your attention like if you support them or not just before the vote.

On Friday, CM PS Golay posted his picture of visiting a government official house on his Facebook page. He posts mostly like occasion visits and his official meeting news.

On Friday, opposition leader Chamling didn’t post anything. It was exactly five days ago he posted about state day wish on his official Facebook page.

Both waste no time in greeting all on the occasion of any religion & community where a new generation can attach into their side. Of course, social media has emerged as a major medium for politicians to upload videos, most politicians’ profiles contain tagged videos by their supporters this is where they check who liked their post and who reacted which post, if you react a “haha” emoji in local party office guy’s political post sooner they’ll spread it like wildfire and inform it to MLA and they’ll note it down and they will never support you. Politicians and political parties guys have been watching these trends emerge and will go to the place where they feel youth looking for a change will congregate. That avenue is social media.

And, some ways dialogue social media allows has come as icing on the cake for many to course-correct. They are experts in adverse poor people, not just a politician even local party office guys do this if a person is from poor background. There is no way to advertise rich as they can’t do this no matter how courageous they have.

The 2024 election will witness an unprecedented level of online SNS engagement. With the growing digitalization of political and news consumption activities in hill areas, we need to understand the role of digital technologies outside. With the most Facebook users on the hill, Nepal Sikkim and Darjeeling present such an opportunity.

The use of mainstream media such as print and TV by political parties will not be done away with, this only appears during election time. The majority of Media in Sikkim will shoot a Live video on Facebook which gets 20k-30k average views per hour with 1k reactions.

The 2024 election campaign is all about Facebook reaction, like how youth will react to politicians’ video speeches. Every household has a smartphone now – haha and anger reaction will make trouble for party supporters, unlike in 2014 when there used to be mass outdoor campaigns and 2019 used to be Social media Live campaigners, and 2024 is more about Facebook react where Neta and his supporter will check out what reaction you had in their previous post & video in any mass media.