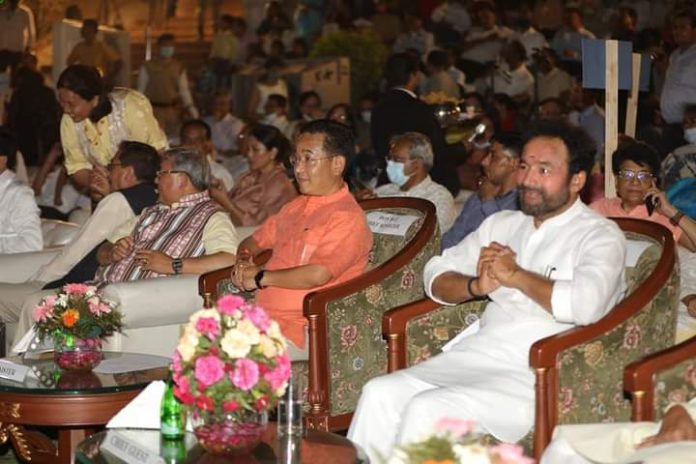 The celebration of the 47th State Day of Sikkim which began on the 16th of May, 2022 in the State capital, culminated in a grand function in the national capital New Delhi today.

A special evening dedicated to Sikkim, with the theme ‘Celebration of Sikkim’ was organised here at the New Moti Bagh Amphitheatre in South Delhi.

This was the first time ever that a function of the Government of Sikkim was celebrated in this scale at the national level.

Present on the occasion was the Chief Secretary and senior officers of concenered departments of the Government of Sikkim, and the Resident Commissioner and officers of Sikkim House, New Delhi, and other invitees.

The function began with the welcome address by Chief Secretary, Government of Sikkim, S.C. Gupta. He gave a brief background of the 47th State Day celebrations which stretched over four days showcasing the rich culture of Sikkim. He briefly highlighted the activities held from the 16th to 18th May at different venues in Gangtok to mark the 47th State Day of Sikkim.

Secretary, Textiles, Government of India, Shri U.P. Singh in his address thanked the Government of Sikkim for hosting the special event at New Moti Bagh. He extended his best wishes to the audience for the special occasion.

Chief Minister of Sikkim, Prem Singh Tamang, in his address, highlighted the journey of Sikkim since its merger into the Indian Union. He paid his tribute to the first Chief Minister of Sikkim Late L.D. Kazi for his role in the merger of Sikkim, and subsequent Chief Ministers for giving continuity to the developmental endeavours. He thanked the Government of India for laying high priority on the development of the North East region, including Sikkim. He expressed his gratitude to the Prime Minister Shri Narendra Modi and his Government for the support extended to Sikkim in every sphere.

Governor of Sikkim, Ganga Prasad, in his address, expressed his gratitude to all the guests and dignitaries for their presence in the celebration of State Day of Sikkim in the national capital. He touched upon the key initiatives of the Government of Sikkim in various sectors.

Chief guest of the event, Union Minister Shri G. Kishan Reddy, in his address, said that Sikkim is one of the most progressive States in the country and has created a unique benchmark in multiple sectors. He added that Sikkim stands at the top position in achieving most of the Sustainable Development Goals. He lauded the State of Sikkim for being an exemplary state, thereby inspiring other States. He said that the vision of Prime Minister Narendra Modi of ‘Ek Bharat Shrestha Bharat’ has translated in true sense in the development in the North East region.
He stressed that the Government of India has given the highest priority to the development of the North East Region.
He said that the upcoming Railway project as well as other projects related to connectivity are being taken up on highest priority.

The Union Minister also assured support in the field of tourism development. He welcomed the proposal of Sikkim to establish a film city/film studio in the State.

In conclusion, the Union Minister reiterated that the North East States have the potential to drive the growth engine of the nation in near future.

The vote of thanks was proposed by Additional Chief Secretary, Department of Tourism and Civil Aviation, Government of Sikkim, G.P. Upadhyaya.

Thereafter, artists of the Culture Department, Government of Sikkim, showcased various cultural presentations to mark the special occasion. The audience was treated to Folk Dances of various communities, ethnic dance of the three main communities of Sikkim and rendition of theme based and patriotic songs. The celebrated ‘Singhi Chham’ or Snow Lion Dance and the ‘Yak Chham’ of Sikkim added a unique flavour to the celebrations.

The cultural presentations was followed by a dinner hosted by the Government of Sikkim, where exclusive delicacies of Sikkim was served.