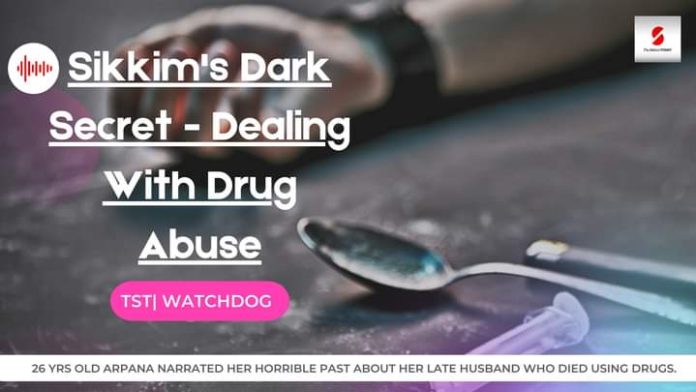 A small room in Jorethang nearby the river has been home to Arpana (Anonymous name) for 8 years, she’s 26 now, and her past story about her husband who works as a driver has one daughter seven years old now.

Jorethang is a border town between Sikkim and West Bengal, known as a drug supplement hub. Arpana, a girl from the far west was married when she was 17 to a boy in the west, just before CBSE in 2013. And later she and her husband shifted to Jorethang after her first daughter was born in 2015 just to make a living and build a good future.

“She was born in 2015, and now she studies in class four I work in a Private firm to support her” Arpana smiled pulling her daughter beside her.

“My husband was a fine and loving man before we shifted here, everything we had settled about future and look at what drug did to him”

“Life was very hard, I don’t know what I was doing back then” Arpana turned down and cried remembering her horrible past where her husband used to beat her whenever he step into a room.

“2-3 boys used to come in our house carrying local branded alcohol, stay up to 11 PM, I think this is when my husband entered into drug stage” She added remembering her past as she can tell each and every detail.

“I did many attempts to do suicide, but my daughter’s hope kept me alive. I let myself suffer to keep her alive”

“And your husband?” I asked her

“He’s gone, the drug took him away,” She said showing his pic in her room. He was a charming young man smiling at a picture of the happiest couple clicked in 2014.

We meet her but she wasn’t ready to tell us anything about her past. We make sure she can trust us because it needed to be told, somehow Arpana narrated her horrible past as she went to every corner of a dark loophole. There are thousands of hidden stories like Arpana whose husband was perfect before someone gave him a single capsule named SP (known as Gotti in Sikkim). There is still a dark story of many young women whose husbands became a victim of Drugs which became a never-ending cycle.

Arpana now stays with her cousin in east Sikkim working in a private firm, her family supports her, sending her daughter to a government school, She is now hoping that drugs in Sikkim needed to end as she doesn’t want to see other’s life like her. She has big dreams for her daughter. As for herself, she counts herself lucky because her family supported her in time.

“When you get to know your husband is doing drugs you enter into a loophole, there is no way to escape it’s like upside down. Talking is very easy, once you enter in loophole you have to face battle yourself to survive” she was crying and paused as she don’t want to tell more about it.

As we spoke with a few drug users in east Sikkim as anonymously, all of them said they were introduced by other people during the party and school functions as teens. There may be a strong link between the drug mafia and some drug-doing teens who can introduce capsules to young students and teens so they can spread and boom business.

Like Arpana’s husband who was fine before shifting to Jorethang, he was introduced to the drug world by another two users who were said to have connected with the upper-hand mafia i.e drug dealers.

We were about to carry out to work with some NGO that used to “Fight Against Drugs” but nobody agreed to ties with us due to fear of getting exposed to their initial work because of their association with government, and later we used to watch out in the same; more than hundred drug gangster has been caught selling drug in Sikkim, mostly urban poor.
At the same time, the government has failed to understand the problem- strictly border checking through the mechanism. The big question was raised in 2018-20 why govt is never serious about checking people on the border who come through the walkway, giving a free pass to the state’s very own SNT is also causing a huge problem. Namthang area seems is a hotbelt compared to Jorethang’s Majhitar area now drug has reached into far rural too. The focus is on ‘Border’ alone in all four routes. Drug Master Mind dependence is a big problem here nowadays in Sikkim. The government should seriously build a special task force that can work initially to caught Master Mind who pour large money to do business as we have seen how the drug can help them to get so they can bail anytime for Rs 40000/- which is nothing for this mastermind. The government should study national-level data mentioned in the Magnitude of Substance Use in India 2019 report and plan a comprehensive strategy. The lopsided and piecemeal approach is not going to work. When the diagnosis is not correct, the prescription cannot help.”
Discussing with Anonymous viewer “Largely, consumers of drugs with small quantities are being arrested here in border. They get bailed out within 1-3 months and they will continue doing business again. They are not being treated as mandated by the law. The numberer of FIRs does not mean that Drug problem has been controlled. Where has the supply chain been broken? (Habit forming) tablets, brown sugar, and other drugs are easily available. Nothing has changed till now. It is the same as it was before 2019. They say that drugs are making their way to Sikkim from places like Siliguri, Kalimpong from the Rehnock side, or maybe Nepal from the West Sikkim side. Have they arrested any supplier of these drugs from those places? The Drug Master Mind-Drug smuggler’s nexus continues like a cycle. There is no change.”

Now the most important question is who to blame? It’s not just Arpana’s late Husband, there are many women and mothers who face the same loophole but can’t open up with society.

The cycle will continue unless the Government became very strict. A few years back one of our team caught two couples who were taking something called smelling drugs near a smoking Room above Axis bank ATM at 9 PM it was during winter time. There were a bunch of gang women and men, speeding drinking something like an abusive thing, and smelling something fishy to get them high, I’m not talking about cannabis, I’m here talking about very powerful drugs, this has become a fashion nowadays in Sikkim. Forgot this all, if anyone visits the toilet in the SNT complex, a bottle of cough syrup will easily be seen inside, not to forget Lal Bazar complex as we have also made a video if evidence is required.

Here comes the question to NGO in Sikkim who run the business on the “war on drug” who doesn’t do anything, don’t even have data or anything just doing drama like campaign saying “No to Drug” doesn’t even help in Sikkim, even people who take the drug will involve in this campaign with the shouting same slogan – “Say No To Drug”.

NGOs who get heavy money should also question immediately, what propose they are doing to stop drugs in Sikkim? Are they succeeding yet since the drug mafia is increasing day by day? Are they helping young women like Arpana who went into loophole? Do they have the guts to find who’s the main mastermind and report it to the police or higher administration in front of the Media?

Last, Chief Minister PS Golay’s announcement on the “termination” of Government employees who are caught consuming drugs is very welcome, but there are also internal sources that many government officials are using the drug have not been arrested yet.

“Where does that drug go after being caught”? Sikkim Police’s answer is each and every capsule will go to “Court” but what after court? Looking at this situation Sikkim has failed to handle the issue with sensitivity. If awareness or rehab, but these rehabs have not been of significant benefit, according to the feedback we received from many parents.

I also feel that Government’s first step should be a “Strictly toward Border” and the second step should be “Questioning NGO, what they are doing till now to prevent this, “say no to the drug” slogan won’t work.
There should be a facility provided to employees across departments that discreetly report individuals who consume drugs and are the habitual offender in this regard with their confidentiality guarded.

Also with few higher-ups in the hierarchy shown the door the lower ones will automatically fall in the line. Lastly, What is the ground reality between increment, and who are the main dealers? It’s confusing and tricky nowadays in Sikkim.

Names have been changed to protect the identity of sources, The Sikkim Today is now planning to work on 15 minutes documentary on this issue.

The writer is the founder and CEO Of the Sikkim Today