Pele was God for us: Former Captain Bhaichung Bhutia 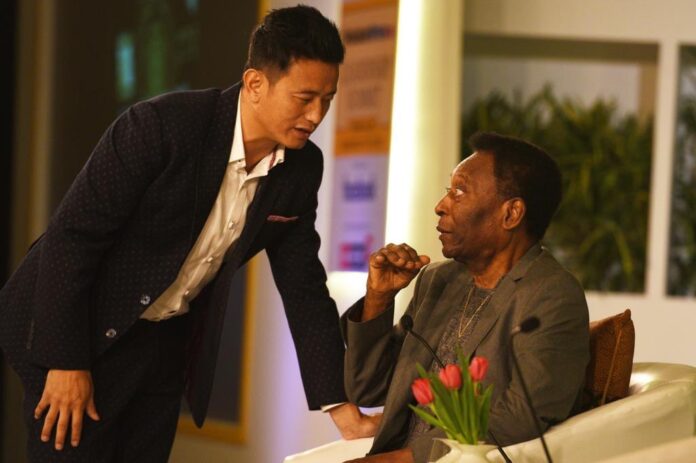 In memory of legendary pele, Indian football captain Bhaichung Bhutia remembering the “King” of the legendary football game. Pele one of the greatest footballer of all time and the only footballer to have won three World Cups, Pele died at the age of 82 after a long battle with colon cancer.

In 2018, Former Indian Captain Bhaichung Bhutia had the opportunity to interview Pele during his last visit to India.

“I had an opportunity to interview him for a summit talk in Delhi. He was such a wonderful, down to earth person, spoke to me close to 40 minutes,” Bhutia recalled in an interaction with media house.

“The conversation was more on football, his life and a bit on Indian football. He had a great sense of humour. I asked him about his India trip, but he could not remember where and which city he played and what was the outcome. Because of the age, alright.”

Bhutia recalled his football memories, considered pele as a true king and God for us. He was such a humble, soft person. Definitely, it’s a big, big loss for football and the fraternity.

He even said he inspired millions and millions of footballers across the world.

The football city of Kolkata watched Pele in action in 1977 when he played against Mohun Bagan in an exhibition match which happened to be his penultimate outing.

Football fever had reached a crescendo as Pele was given a hero’s welcome at the airport and about 90,000 crowd packed Eden Gardens to watch his magical flair.

“Thank you for everything #Legend. You will be missed forever. A three time world-cup winning footballer and a timeless beauty on the field. You were the reason millions started playing the game. Rest in peace the #GOAT #Pele,” Yuvraj Singh tweeted.

“Irreplaceable loss to the sporting world. The heartbeat of football. A magician who mesmerised and inspired generations,” legendary cricketer Shastri wrote.