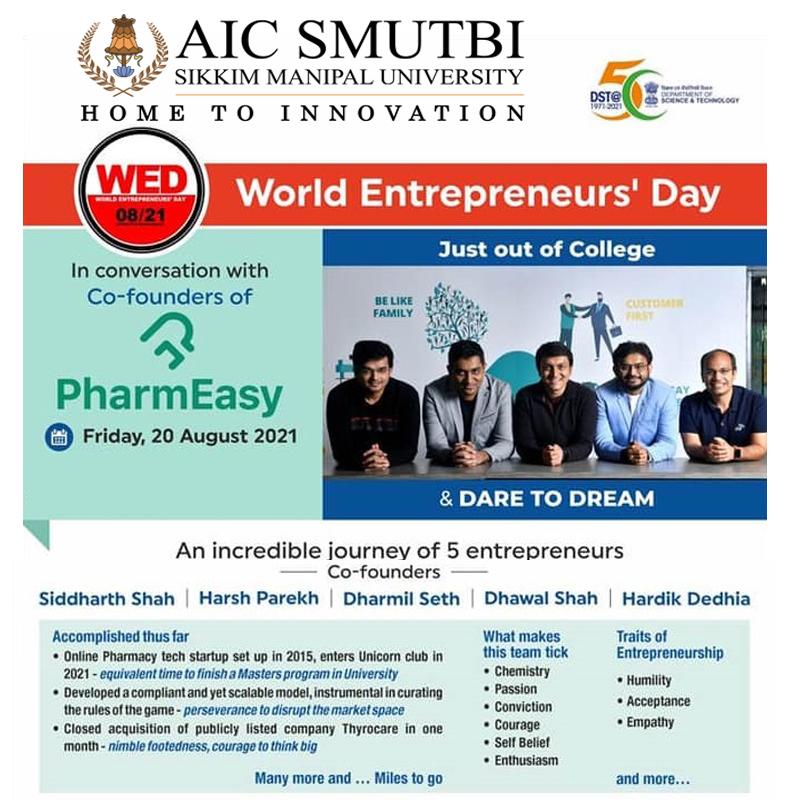 On this occasion, Atal Incubation Centre, Sikkim Manipal University Technology Business Incubation Foundation (AIC-SMUTBI) celebrated Entrepreneurship and the contribution of Entrepreneurs to the growth of the country in collaboration with the Manipal Group and its incubators by organizing a webinar for the startups with the five founders of PharmEasy, one of the startups which became a unicorn during the pandemic.

While the world was struggling to tackle the difficulties of the lockdown and it’s inevitable downturns, PharmEasy went on to scale and became a Billion Dollar company. PharmEasy is an interesting story of a startup acquiring a 25 year old publicly listed company Thyrocare. This webinar, held on Friday, 20 August, was a joint programme of the Manipal Group and associated incubators. The startups at AIC-SMUTBI, Atal Incubation Centre, Manipal University, Jaipur (AIC-MUJ) and Manipal Universal Technology Business Incubator (MUTBI) which are incubators of the Manipal Group supported by NITI AAYOG, DST, BIRAC came together to listen to the nitty gritty of building a successful startup. The interaction was a rare occasion where all the five young founders of PharmEasy Dharmesh Sethi, Siddharth Saha, Harsh Parekh, Dhawal Shah and Hardik Dedhia came together to answer to the queries of our young co-founders in our portfolio.

In line with the pursuits of Government of India towards Make in India and Start-up India, AIC-SMUTBI was set up as one of the 100 world-class incubators envisioned by the Atal Innovation Mission, NITI Aayog Government of India in September, 2018. It is the first Atal Incubation Centre in North-East India and is located inside the campus of Sikkim Manipal Institute of Technology in Majhitar, East Sikkim.

AIC-SMUTBI currently has 61 startups on it portfolio and has so far created 177 jobs and it’s startups have generated revenue to the tune of Rs 16 Crore plus in a span of less 27 months. Some of the startups have won awards a National level and have raised more that INR 10+ crores from various Angels/VCs/Family Offices.