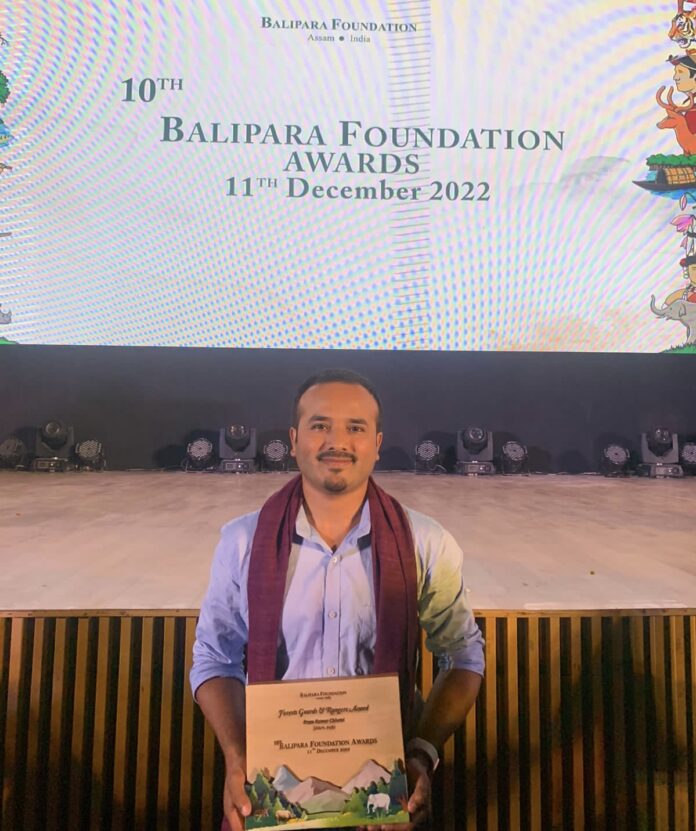 Mr. Prem Kumar Chhetri, Forest Guard, working under Forest and Environment Department, honoured with one of the prestigious awards the ‘Forest Guard & Rangers Award 2022’. The award is awarded at the 10th Eastern Himalayan NaturenomicsTM Forum on 11th  December 2022 at the Independent University of Dhaka Bangladesh.  Dr. Bhoj Kumar Acharya, Associate Professor, Department of Zoology, Sikkim University, nominated Mr. Prem Kumar Chhetri for this award for his works on environmental education by working with a scientific temperament, inspiring and motivating many young generations of Sikkim Himalayas. Being in a position of Forest Guard working in the remotest area under the East Territorial Division, apart from official duties, he has published various scientific research works in national & international journals based on flora and fauna of Sikkim Himalayas. He has been working on biodiversity management and conservation of the Sikkim Himalaya for over a decade, and he has documented many new records of species in Sikkim. Species such as Ophiocordycepsdipterigena are the first record for India, and many new birds for the state of Sikkim viz. Wards Trogon, Solitary Snipe, Ferruginous duck, Brown-headed Gull, Skyes’sWarbler, Terek sandpiper, etc. As a conservation effort, he visited various schools, colleges, and villages to aware the young generation of the importance and conservation of biodiversity. He is also an active member of BAMOS (Butterfly and Moths of Sikkim Nature Conservation Society) through this NGO, he is conducting awareness programs in various schools and villages about the butterflies and their importance in the current scenario. His contribution towards biodiversity management and conservation of Sikkim Himalaya has been recognized and awarded an appreciation letter from the Department of Forest, Govt of Sikkim on 24 January 2020.