Just a Goal Away, Sunil Chhetri overtakes Messi to enter the elite list of all-time top-10. 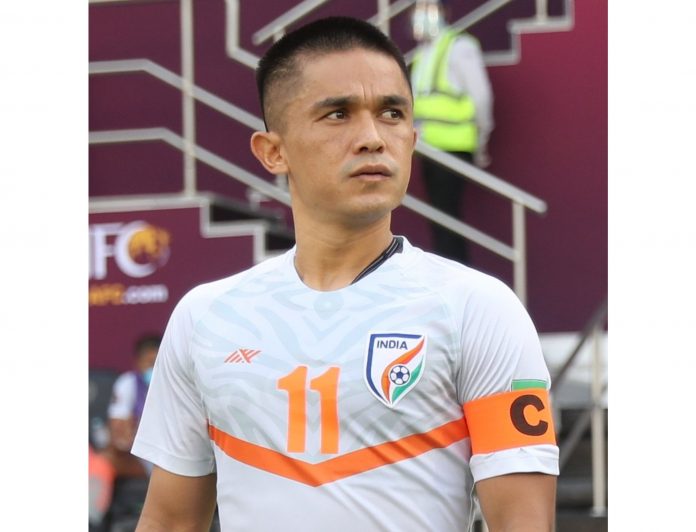 After scoring a brace yesterday in Doha, Indian football captain Sunil Chhetri has made a record for himself. Sunil Chhetri is one of the most celebrated football players in India after former Indian Captain, Bhaichung Bhutia.

Yesterday’s goal against Bangladesh helped Sunil Chhetri lead Argentina star, Lionel Messi, by two goals and sits a place above Ali Mabkhout of the UAE, who has 73 strikes to his name. Sunil Chettri is behind Hungary’s star player Kocsis, Japan’s Kamamoto, and Kuwait’s Bashar Abdullah, who all have 75 goals in their name.

To mark victory about breaking record and cheers to Chhetri, AIFF (All India Football Federation ) cheered him in Twitter posting – “Our @IndianFootball skipper Sunil Chhetri adds another feather to his illustrious cap as he overtook Lionel Messi to become the second-highest active international goalscorer with 74 goals. “A big congratulations to Captain Fantastic & wishing him many more accolades in the future,” AIFF President tweeted.

Chhetri took the Internet by Storm yesterday after India’s win against Bangladesh by 2-0 where both goals were scored by Chhetri in the second half with a brilliant performance.

It took 20 years for India to register a victory in World Cup qualifiers away from home. Currently, India is in the third spot in Group E with six points from seven games.

India will play against Afghanistan in the qualifiers on June 15 next week.