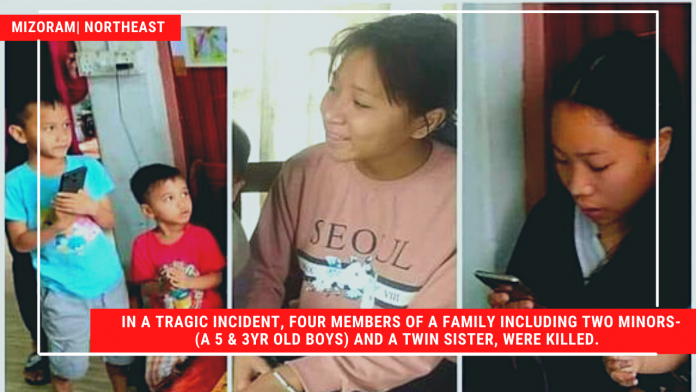 In a tragic incident, four members of a family including two minors-a 5 & 3yr old boy and a 16-year-old twin sister, were killed last night in a house that collapsed due to a landslide triggered by heavy rains at Thuampui Veng, in Aizawl’s suburbs.

At least four members of the family, including two minor children, were killed in Mizoram’s Thuampui Veng village on Friday night at 9:30 PM after their homes collapsed following a landslide, The Sikkim Today reported.

“The debris of landslides fell over the houses in Thuampui Veng which is in Aziwal incident happened at 9:30 PM on Friday, trapping the occupants inside,” District Disaster Management told.

It was a building in terrain, in which a seven-member used to stay, was swept away by the retaining wall that collapsed due to landslide triggered by heavy rains, near neighborhood said.

Six of the seven family members were there in the house at the time of the incident happened, they said.

State Disaster Management recovered four bodies of children age between 3 and 16, meanwhile, the head of the family, Lalbiakzuala who is 75 years old escaped from the debris and another member was rescued alive.

A 16-year-old girl killed was twin sister whose body was recovered on Saturday morning at 6 am.