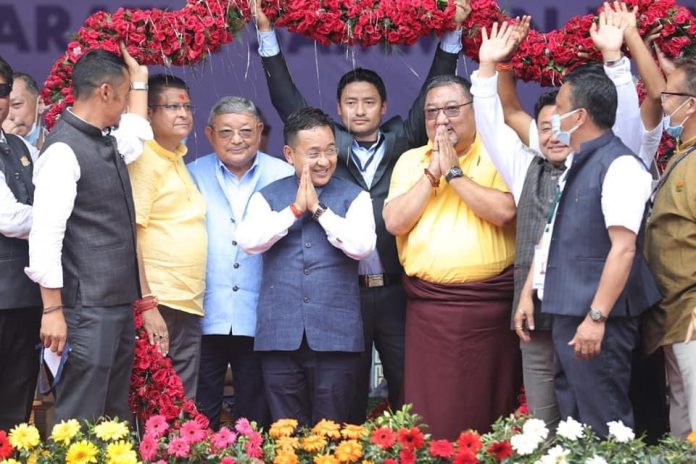 Gangtok, July 27 (IPR): The Sarathi Samman Diwas 2022, formerly called Chalak Diwas, was observed with great grandeur here at Khelgaon in Resithang today commemorating the contribution of the driving community of the State. The celebration was attended by Chief Minister Shri Prem Singh Tamang as chief guest, along with Minister for Transport Department, Shri Sanjit Kharel.

Addressing the gathering, Chief Minister Shri Prem Singh Tamang extended best wishes to the driving community of the State and announced that the State government would officially declare the term “Sarathi” for drivers, with due respect and reference to the charioteers in the Hindu epic Mahabharata. He also announced that July 27 will be declared a restricted holiday dedicated to vehicle drivers from 2023.

Shri Tamang stated that the State government would establish the Sikkim Sarathi Welfare Board that will aid in the long-term welfare of the driver’s community and consist of 19 members representing different drivers associations. The Chairperson for the Board shall be a member of the driver association with one member secretary from the Transport Department, he added.

Taking into account the demand put forth by various drivers associations regarding the provision of employment opportunities for one of the family members of the drivers, Shri Tamang announced that the State government would provide government jobs to one child each of ten drivers from all six districts on an ad-hoc basis. He further informed that five drivers from each district would get a house allotment order before August 15th this year, and Cylinders with gas stoves will also be provided to those drivers living on rent in urban areas.

He also stated that the State government would consider allocating devoted truck and bus parking facilities for every district. He added that a Sarathi Bhawan, which will serve as a guest house for drivers and their families in need, will also be established in the immediate future.

Shri Tamang gratefully acknowledged the consistent support extended by the drivers in strengthening the State workforce in their respective capacities. He expressed that the State government will continue thrusting its efforts to build a self-sufficient community of drivers by making them owners of their respective vehicles. In the past three years, the State government has gifted over 200 vehicles to those financially weak drivers to ensure better livelihood for them, he stated.

Urging the associations to work in tandem with the State Transport Department, he said that the State government would look into the demands placed by the various associations for consideration.

Similarly, a representative from the Sarathi Association and the Convener of State Level Chalak Morcha, Shri Kamal Tamang, also addressed the event and thanked the Chief Minister for his encouraging support.

On the occasion, an ex-gratia of Rs 4 lakh was presented to the wife of the deceased driver, Late Karna Bdr. Tamang, who in a tragic incident, lost his life while trying to save the life of a tourist swept away in a river at Naga in North Sikkim. An ex-gratia of Rs. 5 lakh was also presented to the wife of another deceased driver who lost his life in a tragic road mishap in Lachung, North Sikkim.

The programme featured the presentation of the Good Samaritan Award to Mingma Dawa Sherpa, Maytha Singh Subba, and Mahaboob Rehma.

Additionally, six drivers were selected from all six districts through a lucky draw for the Best Sarathi (driver) Awards who received a Bolero vehicle each. The awardees are Shri Krishna Bahadur Subba from Gyalshing, Shri Karna Bahadur Chettri from Mangan, Shri Zoyel Lepcha from Soreng, Shri Dhurba Dorjee from Namchi, Shri Arun Subba from Gangtok and Shri Alvinash Lepcha from Pakyong.

Thereafter, incentives were distributed to various sporting clubs of the State to extend financial assistance for the development of sports culture and infrastructure. The Transport Department also handed the insurance deed to Government SNT Drivers Association.

The programme also showcased a cultural extravaganza by representatives from various drivers’ associations. An Act play titled Antha Haina, Say No to Drugs was also enacted by DJ & Group during the event.

Earlier, the Chief Minister flagged off SNT Tankers and City Runner Buses from the Khelgaon ground.