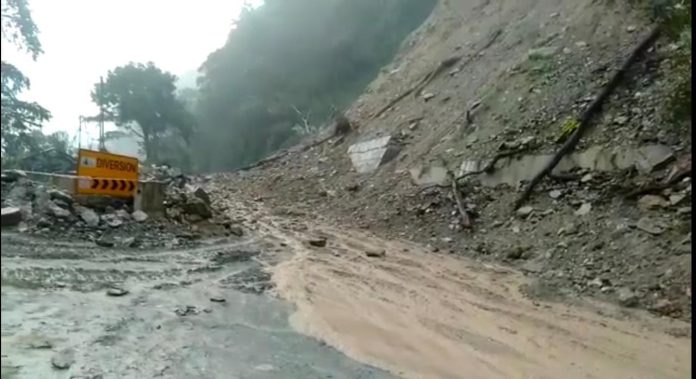 The Hon’ble Chief Minister of Sikkim, Shri P.S.Tamang (Golay), in his address during the 70th Plenary session of the North Eastern Council held at Guwahati on the 8th & 9th of October, 2022 brought to the attention of the august house the present condition of NH10, the only road link connecting Sikkim with the rest of the mainland. He also informed that owing to the worsening situation of the condition of this road, the state’s main source of revenue from the Tourism sector which was just recovering post the CoVID pandemic, was being adversely affected and also problematic for the travellers who are commuting on a regular basis.

A meeting was chaired by the Chief Secretary, Govt. of Sikkim which was attended by DG MORTH and his Team, CE PWD Govt. of West Bengal & his Team, Sikkim PWD officials, NHIDCL and officials from BRO on 17th October, 2022 where the following decisions were taken:

After detailed deliberation and considering the condition of NH 10, MORTH decided that development of road surfaces in entire 52 km stretch of NH 10 in West Bengal will be taken up and surfacing works to be completed by March 2023 positively. Besides out of 20 vulnerable spots identified on NH 10 in West Bengal, slope protection and landslide mitigation works at 4 locations were sanctioned and work will be completed by March 2023. Further, 12 other identified vulnerable locations are to be processed for sanction and proposal for rectification of 4 blackspots to be submitted by the West Bengal PWD immediately.

Officials from NHIDCL informed that the stretch of NH10 (Km 52.00 to Km 80.00: Rangpo to Ranipul) under their jurisdiction would be brought to good trafficable condition within a month’s time. The permanent improvement of the 4 trouble spots (20th mile, 19th mile, S curve & 32nd mile) would require additional time for its study, design of effective measures and execution of the work.

PWD Sikkim officials informed that the stretch of NH10 (Km 80.00 to 92.00: Ranipul to Gangtok) which had only been taken over from NHIDCL in June 2019 and since then no major work had been sanctioned by the Ministry along this stretch till date. DG-MoRTH while intervening, directed the state PWD to immediately put forth a proposal for its necessary repair and resurfacing works to the Ministry for sanction.

Chief Engineer-BRO also informed that a DPR for the long term mitigation measures for the perennial trouble spot at Chandmari had also been prepared by them and the same had been forwarded for sanction.

While concluding the meeting, Chief Secretary, Govt. of Sikkim thanked all the agencies for their prompt response to the issues raised and expressed hope that the condition of NH10 would see visible changes within the stipulated deadline for the benefit of all road users by March 2023.