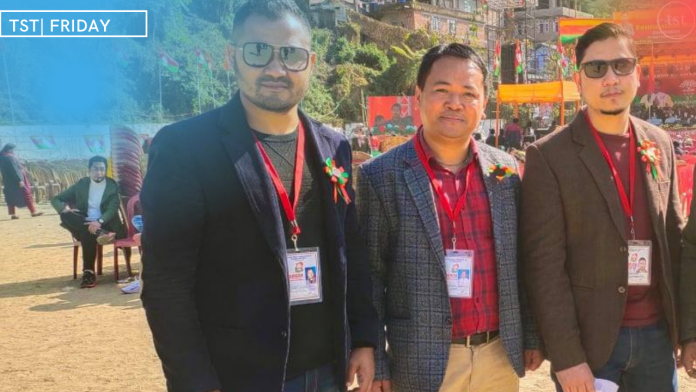 In this week’s Startup Sikkim, we meet Dhananjay Golay, Founder of White Panda (Yangla Food Products), and his Co-Partner Ajit Chettri and Sailesh Sen, which is on a mission to build and support a startup hub in Sikkim.

While Ajit Chettri of Gangtok who was working in Australia for many years with a good-paying Job returned to his hometown Gangtok to do something. After leaving Australia, he went to Kolkota to understand the business model to implement in Sikkim. The lack of entrepreneurship support in Sikkim makes him realise that he wants to do something in Sikkim itself this is where Dhananjay Golay meets Ajit Chettri and Sailesh Sen and discussed upscaling product in Yangla Food Products.

There’s are many scopes in Sikkim like packet food to pickle to other packet eatery items this is where Dhananjay wanted to focus from ground level.

“In 2017 many entrepreneurs from Sikkim tried for CMSS, some left with empty hands and some left with cash but didn’t do anything to support state’s revenue. There has been a lack of entrepreneurship knowledge in Sikkim, this is why locals were seen very less in creating jobs” He said who is also the founder of the company.

In 2020, Dhananjay Golay along with his 2 business partners Ajit Chettri of 6 miles tadong, and Sailesh Sen of Pani house started a factory named White panda chips that produced Chips, Bhujia, Dalmut, and some Eatery in Rangpo’s IBM. The Brand was Named White Panda Chips to make the local brand strong.

Somehow, the brand got strong and the market went up which created 23 workers in which 18 Job was given to local women for long term. His factory even is small venture has now huge production is now going out of state.

“We are focusing to take our product to Bhutan and Nepal if the situation goes normal soon,” Said Dhananjay Golay.

Talking about the pandemic situation and workers of the company, Dhananjay said he still pays salary to them because our company is the only source of income for them, so we have to. They are a group of local women who do very well in the company as soon as lockdown goes over we will resume it again.

Talking about marketing and strategy, “We get lots of order from a local shopkeeper who wants to replace with local product. people loved our product and marketing too went well but the Starting up from IBM Rangpo was very easy for them to communicate all market. The thing is marketing was very tough in the beginning so all trio went to Kolkota again to study about it meeting an experienced businessman and more and returned back.

“On the first day of production, we got 100 pcs of Chips order from the Gangtok store and 70 Pcs from Rangpo next very day we got more than 20 calls regarding the same and our production went up. Starting from local we are giving tough competition to Bingo in Local market” said Sailesh Sen who handle marketing section.

This startup is a self-funded startup from trios that invested their own money. All three raised from their own and they invest it in support the company’s growth to create more employees. Though they are at a loss in the last two months due to Lockdown they still have the potential of growing and taking the market to the national level. Dhananjay Golay wants to make Sikkim self-sustainable in the industry whereas Ajit Chettri also founded Bermoik Turkey farm which is Sikkim’s largest Turkey farm in Bermoik south Sikkim which product Turkey, Local chicken, Kadaknath, and more.

Talking about a local issue in the entrepreneurship ecosystem, Dhananjay suggested young people not to quite a startup thought many Sikkimese people are quitting after 6 months of starting. He also advises other young budding people to become Job creators instead of Jobseeker in Sikkim.

He also suggests the government needs to support the startup ecosystem from root to branch and promoting their product to sell at the national level which will boost the state’s economy too in which Sikkim has many potentials to do something.