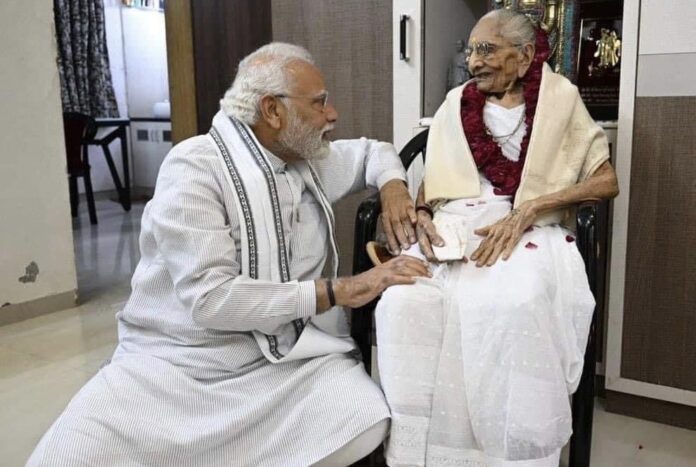 PM Modi posted in social media expressing death of his mother at age of 100. His mother lived with PM’s younger brother Pankaj Modi at Raysan village near Gandhinagar.

Prime Minister Narendra Modi has left for Ahmedabad after his mother died early this morning.

“Smt Hiraba Modi passed away on 30/12/2022, at 3:39 am (early morning, during the treatment at UN Mehta Heart Hospital,” the hospital where she had been admitted since Wednesday said in a statement today morning.

Informing about her death, the Prime Minister posted a heartfelt tweet early this morning, “A glorious century rests at the feet of God… In Maa, I have always felt that trinity, which contains the journey of an ascetic, the symbol of a selfless Karmayogi and a life committed to values.”

She lived with PM Modi’s younger brother Pankaj Modi at Raysan village near Gandhinagar. The Prime Minister would regularly visit Raysan in his birthday and spend time with her mother during most of his visits.

Biren Singh highlighted the value of a mother in one’s life and said. “Deeply saddened by the demise of Smt. Heeraben Modi, beloved mother of Hon’ble PM Shri Narendra Modi Ji. There’s nothing that can fill the void of losing a mother.

In this difficult time, I join the Nation in extending my heartfelt condolences to PM Modi Ji & his family.”