In the panchayat elections, vote for your village or don’t vote at all. 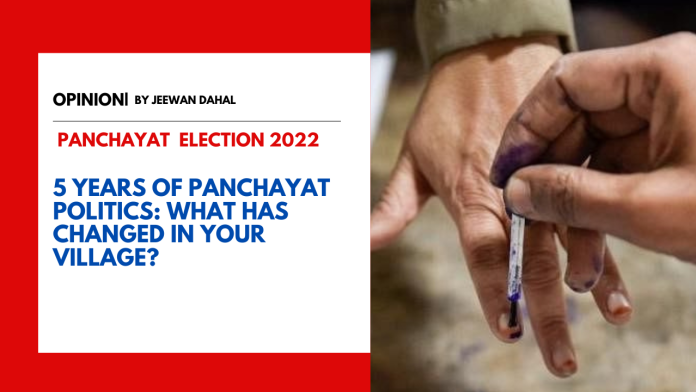 In the olden days, yet golden days, village communities in Sikkim were truly of the people, for the people, and by the people. There were five wise men, the Harka who pretty much were guardians of the village- the wisemen, whose cumulative wisdom and common sense, backed by community spirit managed the affairs of the village and the lives of its inhabitants.

But as in Sikkim panchayat vote is in a week from now, will they treat this as just another form of the Assembly elections, an election of parties, MLAs, and groups of vested interests?

In Sikkim politics, when money comes in, your future goes out!

If this panchayat election is about money coming in & party backed up, it will also be about your future going out, as the Sikkim’s Assembly elections proved.

Yes, there were men from holy institutions who were “guiding” people on which way to vote and the direction to take, but in reality, everyone knew which candidate and party they were backing and who they were opposing, thereby functioning just like any political institution.

Miss Smriti a women who did BA in geography medium, contested election in 2017 and won in huge margin was supposed to develop her village in south Sikkim when it come to 2022 only thing she developed is her house nothing else.

“Nothing happened here, last time I saw this village developments is in 2007 that too foothpath and in 2020 which was sone by “MGNREGA” which is central’s project”

said residents of Miss Smriti who don’t want to support anyone this time.

And here come, then there were other another men who made videos with their familiar speech “If I get elected, I’ll develop this village” and posted in village WhatsApp group and no one was interesting in reply because 8 others were also contested.

In Another village in south sikkim, some were busy making videos saying he is true sons of the soil. One wonders why institutions of faith or videomaking wisemen haven’t given any message for the panchayat elections & village developments. Are these elections too small, or not important enough?

For your village developments, this is a choice you must make, and you must get the message from all contesting candidates.

You have seen the disastrous fallout of following videos of vested interest groups, which brought jumping frogs into the house, and as soon as the rains came, they showed their desire to start jumping both from their parties as well as from the oaths they solemnly took.

Be careful of froggies!

In Sikkim, If the panchayat elections are contested in the same spirit and the same formula, one can say goodbye to honest people’s governance.  You will elect panchayat bodies of ‘froggies’ who will take your vote and then be part of a group that can rule under the blessings of the local MLAs or area ministers. Another election will begone when your mandate is traded and the “Froggie” winners jump. If you vote for them, dirty politics will be at your door in no time.

Young generation, Be careful who you vote!

In Sikkim panchayat election is always backed by political party.

And it matters much more in these elections because this is your election more than any other. Governance starts at your doorstep and spreads to the community.

It’s all about your village, your bunds and fields, your farms, and your way of life. Give this some thought

Have you ever seen how panchayat fund being used?

The right panchayat members will ensure that funds coming into panchayats are spent honestly.

But if the right people are chosen and elected, then we will have stronger panchayats system in Sikkim. And stronger panchayats, which do not bend for any reasons, including monetary, can ensure that anti-people decisions, taken by elected members for their own benefits and “welfare” do not affect the welfare of common villagers.

It will be a hard-fought battle to get a chance to have these elections at all.  And your destinies are in your own hands. Yet again, one should pledge that the panchayat polls should not be a platform of politics of greed but set a benchmark  of honest village-level people’s governance.